The suspicion of fraudulent sick leave

The suspicion of fraudulent sick leave

One of the most frequently commissioned services of the PRIMECHECK detective agency is the investigation of suspected fraudulent sick leave. The reason for an employee's absence from work can be not only a fake sick note, but also the taking up of an unauthorized secondary job that has not been announced to the employer.

Many employees take sick leave for no good reason, for example to evade the day-to-day duties of the job, to get additional vacation days or to be able to pursue another, unscheduled part-time job. Employers lose millions every year.

In order to be able to collect evidence that can be used in court for the termination process, many employers commission a business detective agency to research and observe their employees.

In addition to the legal rules regarding the legitimate interest, there are also investigative techniques that you may know from film and television, but which in reality are not legally permitted and are even punishable. For example, the use of GPS trackers!

In most cases, we are contacted by customers who suspect that they are being monitored in the form of wiretapping technology or mini cameras. In most cases it is men or women who spy on their partners with what is colloquially known as "spyware".

In order to explain a connection between the fraudulent sick leave mentioned above and the use of monitoring technology such as GPS transmitters, we would like to give you a current case study:

Our investigators were contacted by a lady (hereinafter referred to as Ms. N.). Mrs. N. informed our investigators of her suspicion that she was being monitored by her employer.
Now to the part of the case that is relevant and interesting for our detective agency: Mrs. N. did not suspect any direct observation by her employer, but assumed that he was constantly following and monitoring her with a GPS locator. Ms. N. suspected the surveillance technology in her vehicle, since the employer seemed to be informed about both conversations and Ms. N.'s destinations.

To make sure, Mrs. N. commissioned our detective agency to check her vehicle for bugging techniques and GPS trackers.

During the investigation using the latest technology, our specialists from the anti-eavesdropping department were able to locate and secure a GPS tracker in the engine compartment and a mini module dictation machine in Ms. N.’s hand drawer.

Since it was a company vehicle, Ms N.'s employer had the opportunity to equip the vehicle with the monitoring technology after inspecting it beforehand.

According to Ms. N., her employer accused her of fraudulently reporting sick and carrying out an illegal part-time job for a competitor. Ms. N. was also accused of disclosing internal company information.

As already mentioned, the research and observation of Ms. N. by her employer would be justified by a reasonable legitimate interest in the case of a serious suspicion.
However, surveillance in the form of wiretapping techniques and GPS transmitters is a criminal offense unless the employee concerned has given their consent.

Further research into the target person's employer led to the indication that he had already been charged with the use of unauthorized surveillance techniques.

Through the information researched by our investigators regarding the unauthorized surveillance and eavesdropping on Ms. N., she was able to represent her interests in court and provide sufficient testimony through our reporting. 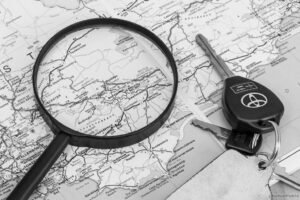